Sometimes, all of us have meltdowns. Not slight upsets, or moments of rage. Full blown, life sucks meltdowns. If you don't carry an autism label and you don't harm yourself or others while having them, they remain private moments of vented frustration one may or may not be ashamed of. Hopefully, no thoughtless friend or family member will live broadcast your meltdown and we won't see it on Periscope or Snapchat.

Like steam escaping from a pressure cooker, once the meltdown is over, life goes back to being lived.

The problem with the concept of melting down and people like my son is the trifecta working against their right to show upset to any large or small degree. That would be the triple stigma of an autism label, not being able to speak about what is frustrating to such a degree that meltdown results, and being a large teen compared to their peers. Add to that my son being a person of color, and specters of possible meltdowns and all the potential imaginary damage that he might inflict during one sends people who are supposed to educate or help resolve his health issues into a fear-laden fantasy of endless catastrophic possibilities. Those possibilities drive critical decisions about everything from where he should be educated to what kind of quality of healthcare he gets and he suffers the consequences for this fear-based policy making in his exclusion from things that the ADA and IDEA are supposed to be there to ensure he is included in.

Like all humans, he loses patience and loses his temper.

He must be allowed to express that to some degree, as must we all.

It does not follow that every planning work about him should lead with how to restrain him, chemically or otherwise. This drive to drug him or place him in the care of men who resemble NFL defensive linemen "just in case" is one of our greatest challenges to counter and this makes his options as he grows older unjustly limited by what people imagine might happen should he lose his temper. We have refused several potential respite providers whose solution to our son's size was to assign someone to him large enough to "restrain him" if he should have a meltdown.

I was saddened when even an activist who I respected, after a meeting, made a snarky comment about potential holes in the walls of any house our son might live in.
Really?

There were no holes to see in our house. So where did that remark come from? I guess it came from the presumption of his degree of disability naturally resulting in wall breaking. Not that damage to property doesn't or can't happen when someone neurodivergent has a meltdown. Sometimes autistic people get frustrated. It is a disability after all. And that activist should know. They were autistic too.  In short, most people, even those who should know better, look at our son and see this:

Imagine what life would be like if your employers, your primary care physician, your dentist, your spouse always kept an adult size papoose handy "just in case" you lost your temper while at work, getting vaccine boosters, or coming in for teeth cleaning. Everyone on edge, expecting that eventually, you would turn green and rip your pants and when that happened, folk have to be ready to wrap you in a blanket or sit on you or call out the National Guard and thereby keep their walls hole-free.

This is what I am supposed to accept as the reality for our son.Yet they cannot understand why I would find such options inhumane and unacceptable. So let's go there. Let's discuss a moment when Mu just couldn't take it anymore.

We've had a hellish 48 hours recently. It began with a simple, irritant. A creature, either of four or two legs, set off a car alarm in the parking area right in front of our house. At an ungodly hour. When Mu was making a valiant effort to fall into an exhausted sleep. That was followed by too many emergency vehicles speeding to some traffic accident too close to this neighborhood, then dawn breaking and the HOA deciding that this would be a great day to mow every shared lawn space on this massive property. Mu was reaching the limits of his patience when a nearby neighbor, getting ready to leave for work, decided the entire neighborhood really needed to hear his taste in music.

What pushed Mu over the edge was in fact, me. I was walking into his room and took a step forward that sent pain searing through my hip so sharply I gasped and involuntary tears poured down my face. Horrified, he went into full meltdown, hitting himself. I quickly checked myself, made my expression as calm as I could in such pain, and repeatedly whispered, "it's not your fault, it is not your fault," until he looked at me and saw me smiling through my pain directly at him. He stopped immediately. A shy, hesitant smile began and I relaxed. I waited seated on the edge of his bed for the pain in my hip to crest and decrease. I suggested a shower might make him feel better. Running water and the StarTrek robe, a birthday gift from his big sister, sent further relief to him. "Let's get you snug in bed and try having you sleep again," I suggested.

When he was tucked in, his favorite music playing on his iPad, I leaned heavily on my cane and limped from his room. "Goodnight, son" I uttered. I moved two slow painful steps down the hall when I heard the words "I love you" waft from his room.

I am the most fortunate of parents.

He lets me know when he's angry at himself. And he lets me know he loves me. That is enough to let me know that this time, my educated guess about the trigger for many of his meltdowns is nearly spot on. That means I can truly work towards a resolution to future upsets by knowing why they happen.

No one is doing research on this. We are simply treating our loved ones like aggressive animals who need obedience school. That needs to change.

Someone I respect greatly told me that caring for a disabled person with intense support needs is a backbreaking, heartbreaking, thankless job. I agree it breaks down the body prematurely. People around you break you down mentally if you allow them to, and usually the ones thinking they are operating with the best of intentions do the worst damage. They demand to know what is wrong with your loved one, then immediately follow with things like "I'm so sorry." My favorite response is "excuse me why are you sorry?" "He's disabled, not dead."

While that may sometimes begin a needed conversation about ableism, the cumulative effect of it is like any form of gaslighting. It is something a parent must counter for their own mental health security. I won't go into having to fight against disparity in everything from health care service quality and delivery to educational supports. It wears down the spirit. 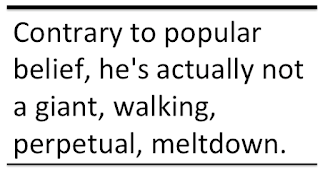 I have a son who demonstrates his gratitude for my care. Many parents don't ever hear that gratitude. They might see it in some fashion, a smile, and eye blink, a squeeze of a hand. But they never hear it. I know what this means emotionally. To know that your son wrongly believes when you suffer it is somehow because you're caring for his needs and being his support staff is a jolting revelation. I see his gratitude in the use of words he rarely feels the need to utter, in his displays of affection reserved for only three people in the entire world, in his attempts to increase his independence. His ultimate love letter, the performance art of his iron will to survive and live on after I'm gone is in his herculean effort to master small but critical life skills.

To understand that my son blames himself for my aging, for a life of harm visited upon me when I was very young because of my race, is heartbreaking. But armed with this understanding, I am able to reduce the dreaded meltdown episodes everyone else seems to fear to events so rare and so brief that when they do occur we are no more surprised than we would be if we had a bad day and just couldn't take anymore.

The criteria for what meltdowns are, why they happen, and exactly how to work with the autistic teen or adult towards a reduction in these events are never a focus of patient-centered research and they should be. Meltdowns are treated like the Gamma radiation that drives the Hulk, and our loved ones are discussed and managed as if any moment they will lift cars and burst through walls, and the National Guard must be called or the entire nation will be destroyed.

This is our story, not the story of another mother and her nonspeaking autistic son. I don't profess to have a "cure" or solution for these bouts of frustration either. I just hope that what Mu and I decided to write about meltdowns begins a better dialog than past articles like the Washington Post's "The Dark Side of Autism." We cannot act as if self-harm and harm to others is a pathological certainty; we need to  begin working towards a true understanding of what causes this state of desperate angst and fugue and thereby learn how to help our loved ones navigate it without chemical, behavioral or physical restraint. What we've done to date is a sort of traumatizing band-aid over the entire meltdown event. You don't force a band-aid on steam escaping a pressure cooker. You move to let steam safely escape. Our approach seems very wrong.

As for Mustafa and I, we are truly good. All the lies about testosterone as Gamma radiation igniting him into a raging teenaged Hulk were so much fertilizer. The truth of puberty and meltdowns? Well, he has acquired a great deal more facial hair. He may need to find gainful employment soon as he is eating us out of house and home. Also, he still doesn't clean his room.

In other words, he's acting like a typical almost 14-year-old.

Now if we could only get the rest of the world to calm down and not stereotype him, we might get some serious quality of life improvements and more stress-free community inclusion going forward.

In the meantime, he lives in a home where all human emotional moments are accepted, love is as abundant as understanding. and this seems to make those episodes rare indeed.